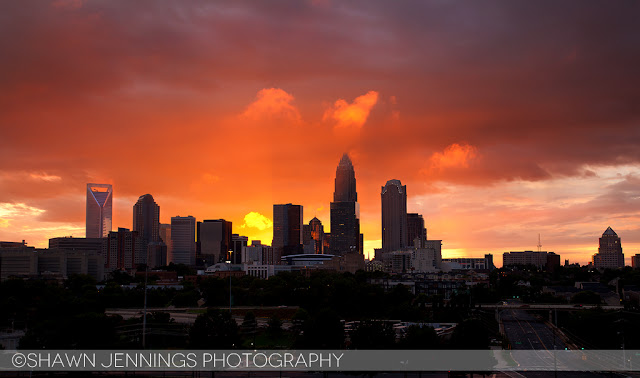 We had a beautiful sunset last night in Charlotte after a storm rolled through. It's probably one of the most dramatic sunsets I've seen here.
Posted by Shawn Jennings at 9:08 AM No comments:

Boone Fork in the Rain 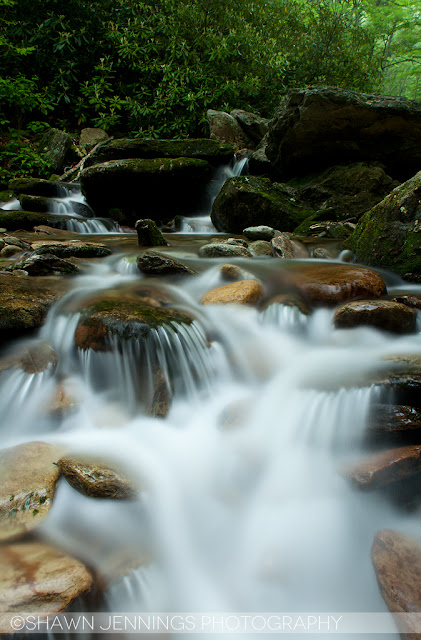 I was on the Parkway last weekend to take pictures and had this particular shot in mind at Boone Fork. It was raining some, so I messed around under the bridge crossing Boone Fork taking some pictures waiting for the rain to let up. When it stopped I made my way to the middle of Boone Fork where I wanted to setup for a shot I had in mind. I got everything setup and was taking a couple test shots when all of a sudden it got dark, really dark, like turn out the lights dark. (For my photographer friends - I was taking 1 and 2 second exposures under the bridge, when the skies darkened I had to increase this one to a 15 second exposure.) I took one picture and decided I wanted to try a portrait composition of the scene and setup for the second shot. Just as I released the shutter the sky opened up and it started pouring down rain. I stood over my camera trying to keep it dry until the camera finished taking the picture. Fifteen seconds later the shutter closed, I grabbed my camera and moved as fast as I could toward the shelter of the bridge, trying not to slip and fall on the rocks and into the water. I got under the bridge, but it wasn't much shelter from the rain. The rain was coming down so fast that it came right through the bridge. I got my camera off the tripod and zipped it up under my jacket. I pulled my camera backpack off my back and pulled the rain cover over it. Then I unzipped the hood out of my jacket and pulled it over my head. At that point I was dripping wet from the rain. I got everything covered as fast as I could, but that rain was coming down so fast everything still got soaked. I pulled my umbrella out, opened it up and hiked back to the car.
You can't tell from this picture, but this is the image I took while it was pouring down rain. Because of the lighting conditions and the long exposure the rain passes through the image frame, but isn't captured in the exposed image. Just thought I'd give you a little background on what I (and other photographers) sometimes go through when making pictures. I plan to try this shot again, but when it's not raining quite as much.
Posted by Shawn Jennings at 8:13 PM No comments: